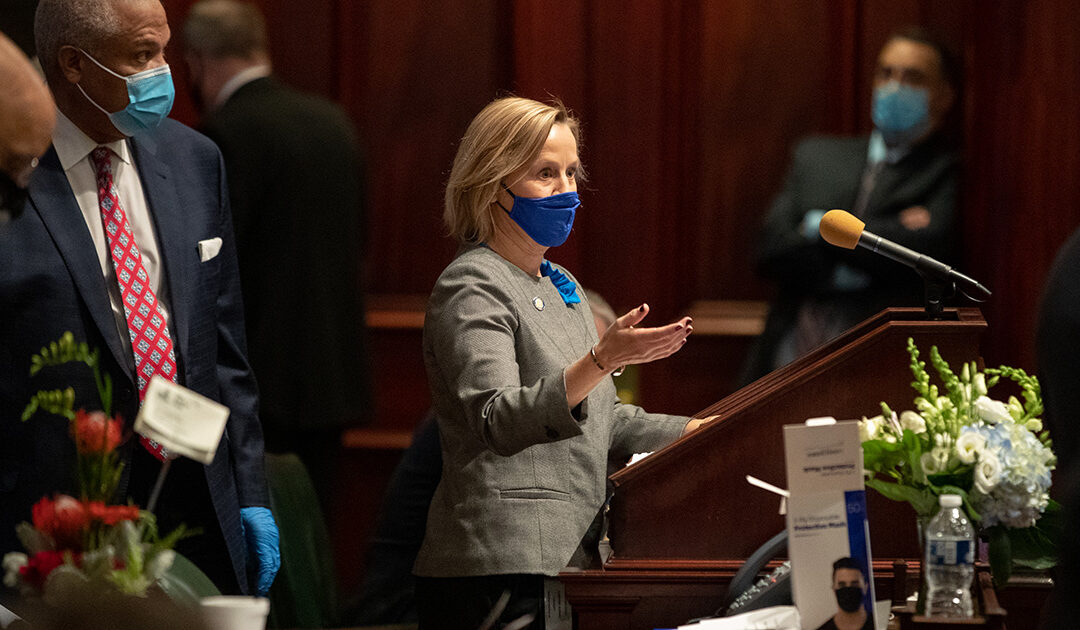 Harrisburg, Pa. – January 6, 2021 — Yesterday, the national spotlight fell on the Pennsylvania Senate because of the outlandish antics of the Republican majority in refusing to seat Senator Brewster (D-45 Allegheny/Westmoreland), whose victory was certified by the Pennsylvania Department of State in December after several recounts and court challenges, and their removal of Lieutenant Governor Fetterman as the President of the Senate when he challenged that refusal.

Senator Maria Collett (D-12 Montgomery/Bucks) joined her colleagues in the Senate Democratic Caucus in walking out of session in protest following these antidemocratic maneuvers. Senator Collett voiced her objections on the floor:

“The majority leaders’ refusal to swear him in today – going so far as to remove Lieutenant Governor Fetterman, the President of the Senate, from his rostrum for following procedure and entertaining motions on the issue – is nothing more than a disingenuous ploy to piggyback on a hot button national political debate and gain favor with an outgoing President and his followers. It’s no secret that Pennsylvania republicans had a good year this year – and they know darn well that these elections, their successful elections, were conducted with integrity and have withstood independent review by countless local and county officials as well as our state and federal courts. You can’t have it both ways. This maneuver denies the reality of close elections and temporarily denies representation to the people of the 45th senatorial district while a final, doomed legal challenge plays out.

Ultimately, Senator Brewster received 69 more votes than his opponent in a hard-fought race. Just because an election is a close one does not mean it is illegitimate. On the contrary, it highlights that in a democracy, every single vote makes a difference, and that the voters — not legislators or judges — have the final word.”

Senator Collett’s remarks on the subject were read into the official record at the end of yesterday’s session. You can read her full remarks here.

The Pennsylvania Senate also voted yesterday on SR 3, the operating rules for the chamber’s 2021-2022 session. Senator Collett voted no on this resolution and shared her reasoning on the floor:

“Call me crazy, but I believe we should be implementing rules and procedures that we can all live with and serve our constituencies under whether we are part of a majority or minority party. We were each sworn to represent our constituents, not any political party, and as members of a chamber where the majority and minority are subject to change every two years at the will of the voters, we should all be encouraging a fair playing field that puts the interest of Pennsylvanians first and foremost, and fight for a process within our rules where votes determine the fate of ideas and policy proposals, not a handful of powerful party leaders.

Our rules should encourage a rigorous exchange of ideas and allow for true minority participation in our legislative process, whether that be a political minority, a geographic minority, or a minority with respect to a particular issue. The resolution offered today does not do that.

Instead, like the maneuvering by the majority earlier today with respect to Sen. Brewster, Republicans in this chamber wish to set rules which continue to grab power for their leadership and limit the ability of any initiatives that are not anointed by those leaders from moving forward.”

Senator Collett hopes that after the results of Georgia’s senatorial runoffs and today’s electoral college vote in Washington DC are certified, the Pennsylvania Senate can begin to heal the toxic divide stoked by the outgoing president and get back to the critical work of ending the COVID crisis and addressing the damage it caused so many Pennsylvanians.