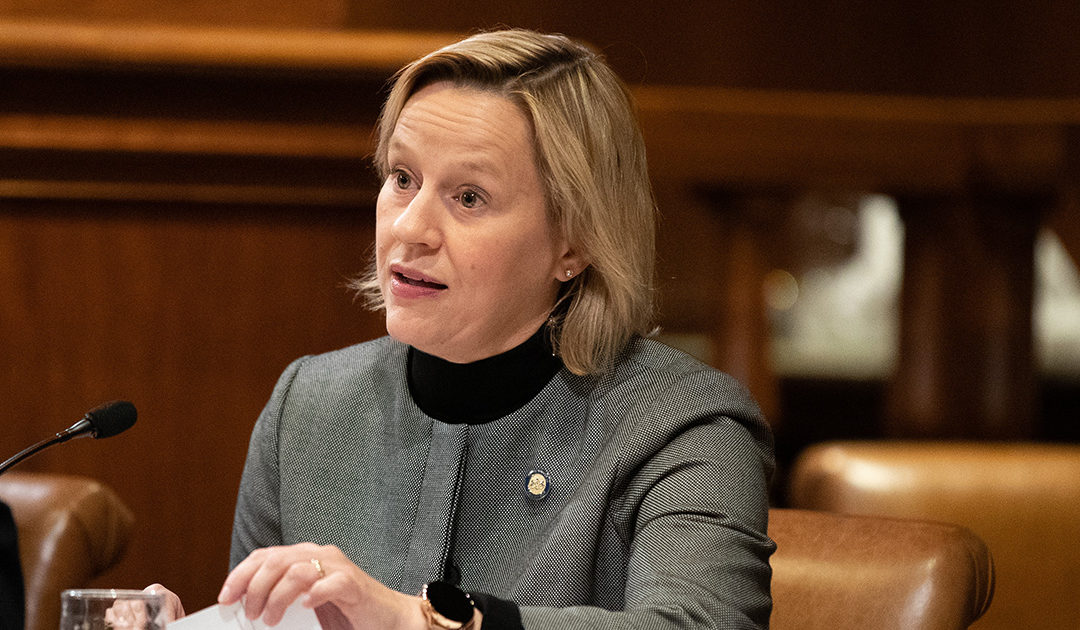 Harrisburg, Pa. − May 8, 2020 — At yesterday’s joint hearing of the Senate Aging & Youth and Health and Human Services Committees, Aging & Youth Democratic Chairwoman Senator Maria Collett (D-12 Montgomery/Bucks) heard testimony from panelists in the administration and those representing nursing homes and long-term care facilities to discuss what’s happening at these facilities during the COVID-19 crisis and how to best address it.

According to Senator Collett: “I left yesterday’s hearing with an even greater sense of urgency and commitment. We need to get more tests and PPE to our nursing homes and long-term care facilities and we need to do it now. It is unacceptable that there aren’t enough tests for asymptomatic residents and staff when we know darn well that these facilities hold the key to mitigating the spread of the virus and reopening our region.”

As a former infection control nurse at a Bucks County long term care facility, Senator Collett was uniquely qualified to explain the dangers of failing to include these residents and staff as part of the bigger picture, highlighting the distances from which staff and doctors travel to get to work and the multiple numbers of facilities at which a typical staff member might work. Other panelists further emphasized that the intimate nature of the care they give, such as bathing and feeding, does not permit social distancing.

Panelists Zach Shamberg, President & CEO of the Pennsylvania Health Care Association (PHCA) and Mary Kay McMahon, RN, MHA, NHA, President & CEO of Fellowship Community, a senior living community in Lehigh County, both testified to the importance of including our nursing home residents and staff numbers in the county and statewide totals for purposes of assessing readiness to reopen. According to Mr. Shamberg: “Nursing homes, personal care homes, and assisted living residences are part of our communities, and staff go in and out of those facilities. Residents are discharged from those facilities. Residents are discharged to the hospital from those facilities. Ancillary providers such as therapists are going in and out of those facilities… I truly believe long term care is the key to reopening the state of Pennsylvania, county by county.” Ms. McMahon added: “[Because we don’t have enough tests], our staff actually gets sent to testing centers… But if they do not have symptoms, they cannot get tested. And we have had staff members who have been exposed here that we really wanted tested to make sure that they were still negative or to find out if they were positive and they were refused at the testing site because they did not have symptoms. That is really harmful at this point in time. After two months of this, we should have moved beyond that.”

Mr. Shamberg added that without mass testing, immediate, ample supplies of PPE are even more critical: “We know that PPE, or personal protective equipment, has been proven to mitigate or stop the spread of this virus. So if we’re not going to be able to test, then we need to make sure providers have adequate PPE so that they can be safe so that their residents can stay safe.”

Senator Collett pressed Secretary Levine on Pennsylvania’s preparedness to open up testing to asymptomatic nursing home staff but Secretary Levine did not offer much agreement on the urgency of that type of plan, saying instead: “Asymptomatic population-based testing is something we’re talking about for the future. To do that on a widespread level you’re going to have to have even more tests than we have available now. The issue with testing asymptomatic patients is [they could be] negative on Sunday when they go to the site, and then you could be positive Monday, and you’ll never know the difference.”

Senator Collett and her colleagues on both sides of the aisle raised concerns about the lack of prioritization given to the exploding crisis at Pennsylvania’s nursing homes and long term care facilities, and called on the administration to act now.

According to Senator Collett: “I’m sick and tired of our seniors and their caregivers being pushed to the margins of our reopening and recovery plans, or excluded from them completely. Pennsylvania is home to more long-term living communities than any other state. Not only are they home to many of our loved ones, they are a major employer to many of our neighbors. We don’t reopen and rebuild by ignoring the problems at our nursing homes and long term living facilities. We reopen and rebuild by addressing them. It’s something we should have done weeks ago, and it’s something we must do now. I am calling for my colleagues in county government and the Wolf administration to make this a top priority. Other states are doing it. So can we.”

Senator Collett’s opening remarks and questions to panelists can be found here, here and here.